BRAMPTON, ON. (April 12, 2019) – Employees of the Region of Peel raised almost $340,000 through personal donations and events in support of United Way Greater Toronto in 2018. These efforts will support United Way in delivering services that meet the urgent needs of Peel residents. A cheque for $338,367 was presented to Daniele Zanotti, President and CEO of United Way Greater Toronto, at Peel Regional Council on April 11, 2019.

Presenting the cheque on behalf of Region of Peel employees were Olivy Purakal and Judy Labelle, Co-Chairs of the 2018 campaign, along with Nando Iannicca, Regional Chair, Janette Smith, Acting Chief Administrative Officer, and Kathryn Lockyer, who is both the Regional Clerk and United Way Campaign Executive Sponsor for the Region.

“I am very proud of the employees at the Region who, for more than 40 years, have raised funds for the United Way,” said Smith. “Their compassion and generosity help keep programs running, meeting the needs of our community and ensuring that people can get help when they need it.”

Over the past 10 years, the Region of Peel employee United Way campaigns have donated more than $3.4 million to support long-term social change in the Peel community.

“We hear from so many staff that they work at the Region because they want to give back to the community. The contributions made by Regional employees shows their commitment to improving the communities where they work and live,” said Smith. “Thank you to all employees who helped the Region make this significant contribution to our community, and congratulations to the Regional staff for being recognised by the United Way as Gold level leaders.”

“In our first joint campaign as United Way Greater Toronto, led by over 60 volunteer cabinet members including your own CAO, David Szwarc and other leaders, we raised a record $110.3 million,” said Zanotti. “Thanks to you, this was 2018’s largest United Way campaign in the world.”

The United Way supports more than 50 agencies that deliver over 80 programs to communities across Brampton, Caledon and Mississauga. Last year, according to Zanotti, over 200,000 Peel residents received a helping hand from United Way Greater Toronto.

“The Region of Peel is one of our top contributing United Way partners,” said Zanotti. “They have a rich legacy of supporting our community initiatives. By bringing people together to fundraise for the United Way Employee Campaign, they helped tackle #unignorable issues in the community like poverty, homelessness and social isolation. Thank you all for showing your local love. It truly makes a difference." 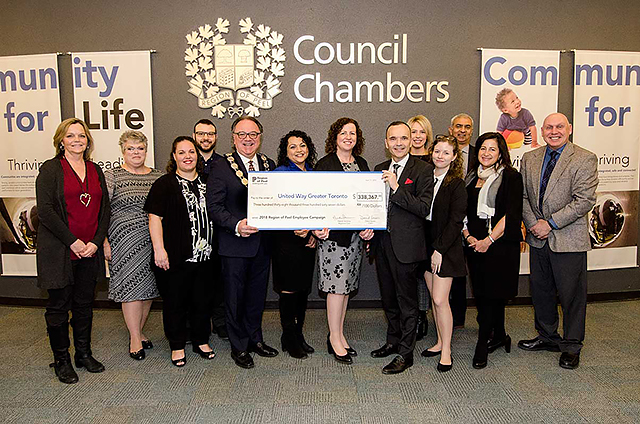 As the largest non-government funder of community services in the GTA, United Way Greater Toronto reinforces a crucial community safety net. United Way’s network of agencies and initiatives in neighbourhoods across Peel, Toronto and York Region works to ensure that everyone has access to the programs and services they need to thrive today. Mobilizing the network and other community support, United Way tackles #UNIGNORABLE issues linked to poverty. United Way’s work is rooted in ground-breaking research, strategic leadership, local advocacy and cross-sectoral partnerships committed to building lasting solutions to the GTA’s greatest challenges.unitedwaygt.org

The Region of Peel works with residents and partners to create a healthy, safe and connected Community for Life for approximately 1.5 million people and over 175,000 businesses in the cities of Brampton and Mississauga and the Town of Caledon. Peel's services touch the lives of residents every day. For more information about the Region of Peel, explore peelregion.ca and follow us on Twitter @regionofpeel and Instagram @peelregion.ca.